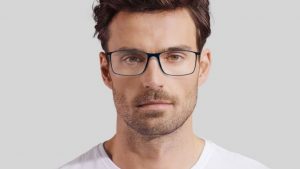 It was time for new glasses.

My girlfriend, at the time, insisted.

So that weekend we sauntered into the Synoptic store on Strandvejen in swanky Hellerup to buy some cutting edge spectacles from Steen, the sophisticated salesman there. The chosen pair turned out to be Danish designer stainless steel trifocals with lots of scientific reasons for why my vision would improve so as to be on par with Superman’s, and why they would cost as much as an Apple computer.

I collected my new gear a week later.

The case, consisting of a pristine white leather outer and a fitted black velvet cushioning inner, while impressive, fell a bit short of justifying the exorbitant price of its contents. Nevertheless, I plopped down the cash – bushels of it, and sauntered, nose in a slightly higher trajectory than when I entered the botique – as one does in Hellerup, and out into the world.

The only problem was that everyone on the street was much blurrier than when I had entered.

My heart sunk. Did I just spend a ton of money on (very cool) worthless glasses?

To be fair, Steen had assured me that in six weeks my brain would somehow adapt to the trifocal configuration. He went through a litany of reasons for why this was so, but let’s face it, my Danish has never been THAT good, so I probably missed one or two keywords that would have convinced me to a higher degree than I was; somewhere near zero.

The truth was that I simply wasn’t convinced. How the hell would my brain be able to compensate for that much double vision?, I challenged him. Silently.

After putting up with living in a haze for a full five weeks, (although I admit that I was starting feel quite smart with the stainless steel “get-an-attitude” frames), I marched back into the downtown Hellerup eyeglass store for fashionistas with bulging wallets and asked to speak with stylin’ Steen.

Steen (pronounced, unappetizingly enough, more like Stain in Danish) responded to my complaint with the calmness and confidence that only cool, designer-jeans-wearing opticians are able to convey:

Michael, he explained with incredulity, it’s only been five weeks since you received those glasses. I told you it would take six weeks.Pointing to his red diary with a perfectly manicured pointer finger, he concluded: It’s only been five.

Then he mechanically grinned showing two perfect rows of bright white teeth, and just as he was about to return his attention to another customer, I blurted out, But it’s been five weeks, and I don’t see how a sixth is going to make that much of a difference.

A week later, exactly as promised, my brain had somehow overcome what I thought would be an insurmountable hurdle of blurred bystanders in the distance. Indeed it seemed miraculous. How could one more week make that great a difference? For five weeks I couldn’t make out cars in my rearview mirror and suddenly they were Zeiss-lens-sharp.

I learned three great lessons from this experience:
1. If an expert tells you something that is perhaps a bit counterintuitive, give them the benefit of the doubt even if you think you know all the answers.
2. Getting used to something is often an incremental and gradual process, but it can also happen abruptly after a long wait.
3. Becoming more fashionable requires risk, but there is good reason why the more fashionable don’t return to their conservative roots. It’s a lot more fun!