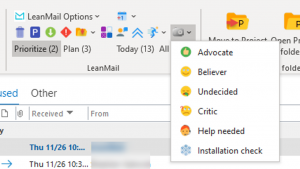 I can imagine being on the other end of being asked to send in the “snow” – your empty inbox at the end of the day with 0 to prioritize, 0 to plan and 0 Today. On first glance, this request may seem a bit over the top. I get it.

If you still feel that way after reading this, then, by all means, feel free to stop, but hopefully, this will shed some light on exactly why we request snowmails, and why exactly 20.

First, you should know that we call them snowmails because the objective is to have lots of white (snow) in your inbox.

Second, I want you to know that this service is for you. It actually takes up quite a bit of resources to monitor “the snow”, but we do it because our experience tells is it’s a game-changer.

Third, it might be helpful to know that before we started requesting snowmails many years ago, the level of adoption of our customers was just a little over 50%, and puzzlingly enough it didn’t matter how excited a participant was initially.

Ironically, those who greatly appreciated the method from the start were just as likely to disengage as those who were a bit skeptical. So imagine going through all that training – and receiving all the benefits, only to end up not using the methodology after a week or two. Talk about a waste of time and resources.

I would like to say that we have uncovered various studies in the literature that helped us point to our findings, but the only studies available on this subject are our own. Luckily, we have been at this for over a decade and a half, and even luckier, that we have taken great care in analyzing the data we receive from participants.

We first started experimenting with snowmails in 2011. We started with requesting 5 snowmails, and indeed adoption improved by over 20%. Over the years, we have experimented with various amounts including 30 — a bit too much we found out!

Through empirical evidence, we learned that the magic number is 20. This is equivalent to sending the snow every workday for four weeks. Frankly, we don’t know why it is twenty, but we can assume that it takes that many snowmails for participants to lock in the “0 to prioritize, 0 to plan and 0 Today” procedure.

In truth, very few novice LeanMailers are able to complete all 20 within 4 weeks. Those that do are probably a bit more innately disciplined. And I probably shouldn’t divulge this, but six weeks is about average (still, you should try to get to 20 asap!). Whether you do it in four or six doesn’t really matter. What matters is that you complete the 20 because our statistics say that if you do, there is an over 90% (!) chance that you will lock in the habit and continue to be as efficient and effective with email as humanly possible (until we find more ways of improving – and we continuously try!).

One last point about why sending the snow works. What we hear most people tell us is that reaching the goal of having an empty “Today” view (inbox zero) at the end of the day becomes associated with both relief and pleasure. Those two feelings, combined, reinforce an excellent habit that we know is hugely beneficial to us.

Like all habits, repetition is key. For LeanMail, the number of repetitions turns out to be 20. Of course you won’t know that if you don’t get there – and I don’t mean 18, I mean 20!

Check out my “Designer glasses story” to find out about how precise the number of repetitions can be.